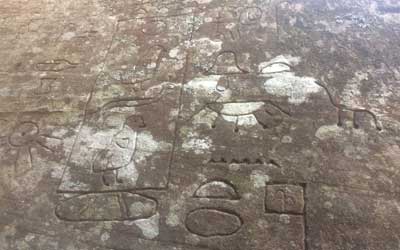 Reptilian star people flash before my eyes. A stranded starship. An Ancient Egyptian prince. A deep dark crevice in the Earth Mother an ancient cave of sorts.

I am standing in an Aboriginal sacred site called Kariong in Gosford, Australia.

A group of 15 strangers meeting for the first time through the Sydney Star Children Meetup lead by Mike Starman. A short hike takes us to the in-the-middle-of-nowhere site. From the ground it looks like a pile of large rocks or monoliths. We follow the lead and climb un in between large slices of rock wall and voila you can see on either side of you Ancient Egyptian glyphs!

The glyphs look like they are hand drawn and do not look like the laser precise hieroglyphs one gets to see in Museums around the world. For this reason it is easy to discount them off as fake or unimportant. Lucky for me I am intuitive and I am always surrounded by intuitive friends, family and strangers. I am not attached to the idea of ‘are they authentic Ancient Egyptian’ or not. I was drawn here compelled after learning of their existence while cushy on my couch home in USA. A few months after watching the glyphs on as many YouTube Videos I could voraciously watch I am magically in the Land Down Under! I am here in 1 hour away Sydney to teach a workshop on Galactic Shamanism and to get activated by this very ancient sacred land. She has called me and I came.

Standing between the slabs of monolith stone placing my hands on the glyphs I start to get images. Third dimensional reptilian race came down to this site and crash landed. This location on the Earth acts as a beacon of light as it had a geomagnetic portal of sorts. Some ancients build a sacred altar in this area to maximize the free fountain of magnetic force pouring out of Mother Earth. It feels like there is a giant cavern beneath us. Or a built secret chamber of the epic porportions portent of the King’s chamber in the pyramid of Gizah. A healer woman next to me is speaking out loud, utterin the visions she is receiving. She too sensed a powerful force beneath us and the sacred chamber. She also sees reptilian race and a falling crash landing. The beings, we both sensed, were drawn to this magnetic fountain on Earth but upon arrival were shocked at the density of the Earth. Tried staying, tried making the most of this but they began getting caught in the lower gravitation pull and the lower density frequency. It brought them down in thoughts, down in abilities. As though the lower gravitational pull was their Kryptonite. There is a sense of sadness and of unfinished busness here.

This one crash landing, both of us healers felt, was roughly 4,000 years ago. She then inuited that there had been an earlier landing 40,000 years ago. I too sensed that a very long time ago there had been an earlier landing. Maybe 100,000? A very long time. Beyond the usual markers of time that one can grab on to. This earlier landing was a cleaner visit the beings were higehr dimensional and were called by the intense magnetic out pouring avaiable here by Mother Earth. I am not able to sense yet what ingredients are creating this vortex. It must have certain leylines and underwater rivers… a conglomerate of Earth meridian intersections to create a specific uniqe vortex of these proprotions.

Who wrote the glyphs and why? Those are the questions my human mind posed and yet I was not able to ask. Instead I was swallowed by the Earth Mother cavern, I was taken to the inside King’s Chamber and I was shown that secrets are still held in there and that we are not allowed access to them. Yet. As with many sacred sites around the world they are layered by multiple imprinted presences and 3D scientists only grab the most recent activity. Therefore, by those standards the glyphs might be only 2,000 years old. That is the thing, the glyphs have been mixed they are not pure they are not just one source. They have one message stream for the regular person to access and then ther is a whole sublayer, subminial message for the Ancient Mystery initiate. At this point anyone who is seeking, awakening is an Initiat from one lifetime of service or another. The information is for those who have their eyes open.

Upon closer look the adhoc natural forming slabs of rock began to look like very ancient stonehenge-esque temple style structure. Very, very ancient. The place has a feeling of unfinished busness. Some sense of lack or of having immense potential but that too many contrasting races or views in one place. Like many sacred sites there seems to be a battle for the control of the site, for sole access to its power source.

In alignment with my previous visions from other sites this one was initially accessed tens or hundreds of thousands of years ago by higher dimensional intelligence. And chunks of time after the ruling forces of the site were progressively less and less enlightened. So there is a strong sense of de-evolution and of a diamond-in-the-rough feel of unused, untapped into raw force.

A few steps away is another mysterious rock that is known to the local Aboriginals as the Woman’s Ritual rock. Out of a group of 15 people three of us woman had strong visions on the Womens Rock. We saw an Old Wise Woman who was dancing ceremonially and showing us various body positions. One that I was clearly shown was to sit with your female center parts exposed right onto the rock! Two of us sat in that way with our clothes fully on and started giggling irrepressably. The joy from the rock lasted a while and the men felt definitely not necessary. The rock was magical!

At yet another nearby rock were these melted rings. I had a very strong vision of heat propulsion system. As the mini-star ship landed  here or got too close. The healer woman sensed the same story. This was the star being who landed about 4,000 years ago. Our feeling was that the reptilian beings who landed here were not necessarily a negative race. Nor were they highly evolved. I did not get a sense of what star nation they were.

You are invited to see what you sense, access or receive. As one of us tunes in we are encouraged to tag along and see what we catch as we jump on that wavelength!

Hiya! Check out the supersonic 40% sale for oracle cards! Dismiss